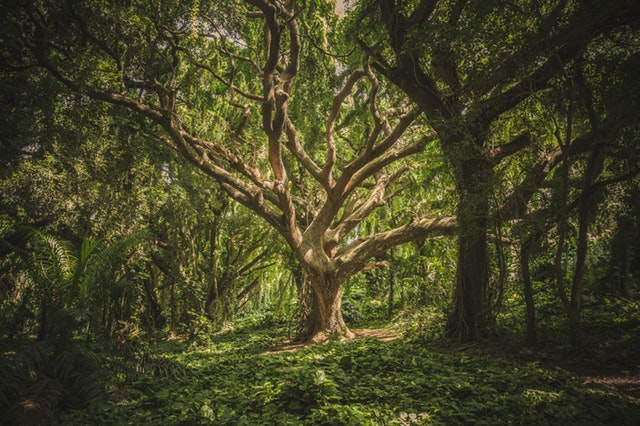 The forest floor is bare, as bare as if fire has swept through in the last few days. The ground is dark, black as coal, and ivy clings to the trees. Draping from the branches, winding around the dead trunks, the bare twigs. Clinging to the bark. They’re all dead, all of them. Every tree in this forest. The only green is from the ivy.

Only the ivy is still alive.

It sensed me as soon as I stepped beneath the first trees. Long tendrils reached out, brushing against my hair, winding around my ankles, my wrists, then letting me loose again. It was knew I was coming. The gift I brought it is in my hands; its vines move out of my way as I walk.

I stop beside an old oak. It’s hollow now, the life sucked out of it by the clinging ivy. I kneel down beside the dead trunk and dig a hole in the sooty ground, planting the sapling I brought. It shivers as its roots touch the ground, and when I’ve planted it and covered the roots with dirt again the ivy attacks. Winding around its slender trunk, engulfing the thin branches. The sapling shudders, already dying. I step back, say aloud, “I brought it! Let him go now.”

A whole second passes. Then two. I count my own heartbeats. Then a tangled knot of vines and leaves beside the trunk unravels, and Luther scrambles out. He has a cut on his cheek, and his eyes are wide. But he’s alive. I take his hand, and we run.