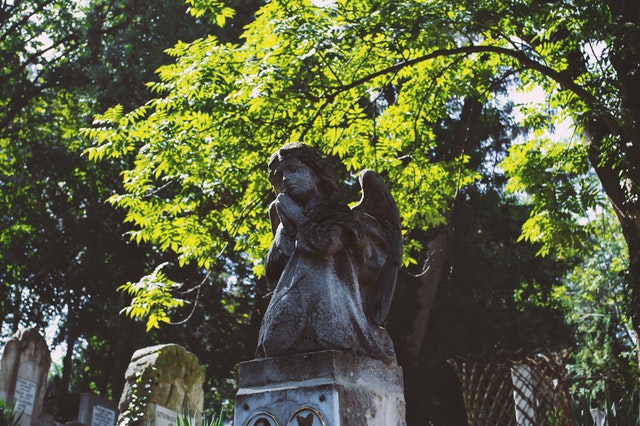 I take them to the tombs as soon as they arrive. Marcus brings them out of the trees like a huddle of wet chicks, their hair and clothes drenched by the weeping rain, their eyes wide in their thin faces. I’ve never seen him bring so many, but he says that the silver mines are getting worse. The more children that escape, the harder the slave drivers push the others. He couldn’t afford to leave any behind this time.

We bring them to the graveyard and hide them in the stone coffins. They’re afraid of the dark, the stone angels, the heavy coffins, but they’re more afraid of the soldiers that will be riding after them through the trees. They can’t be far away now.

As soon as the lids are shut over top of them, I hurry back to the caretaker’s house. Marcus stays behind, in the coffins with the children, and my father and I will greet the soldiers when they come. The gravekeeper and his daughter.

Hopefully the rain will have erased their little tracks by that time.

The stone angels watch me go as I run down the paths. I can already hear the clink of armor, the rattle of hooves in the dark pines beyond our walls. They’re coming for the children, and this time I’m afraid they’ll find them. We’ve never hidden so many before. If one of them begins to wail, just one, we’ll lose them all, and Marcus too.

Doubtless the soldiers will kill us on their way out too.

My father stands at the gate as they arrive. He’s holding a lantern in his shaking hand, and leaning on his stick as if he needs the support much more than he really does. His hair is white and lank with all the rain, and the scar on his face is livid in the lamplight when he smiles at the approaching horsemen. “Come to visit the ghosts, gentlemen?”