History is one of my favorite subjects. Any history. Ancient Greece, Egyptian pharaohs, Roman invasions, WWI and WWII, all of them interest me. However, I had a difficult time with history in school, and a good portion of what I learned, I forgot soon after.

I don’t like dates or maps or statistics. I can’t stand long, drawn out datelines and genealogies, geographical data and names of battles that are only ever summarized and never described. 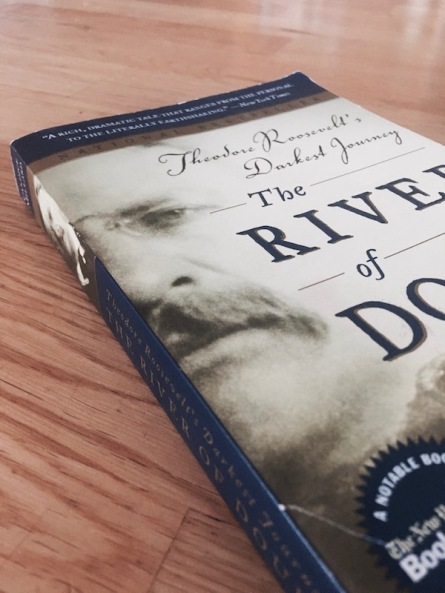 To me, history is about the people. Not when they lived and how they died, but how they lived. What they saw, what they thought, how they dealt with the things happening around them. The Diary of Anne Frank, The Hiding Place, Schindler’s list, all of these books detail the lives of people living the events that no historical article or statistic will ever fully describe. Books like these ones are few and far between, and I collect them voraciously.

Another such book, one that isn’t fixated on dates and pumping information into your head for a test, is The River of Doubt.

I picked this book up in a thrift store a while back, thinking the title sounded good and the subject was—mildly interesting.

I was not disappointed.

The River of Doubt is the story of Theodore Roosevelt’s last—and perhaps his greatest—journey, and one that nearly resulted in his death. (Yes, I know, our 26th president was crazy. He probably almost died a lot. I admire him so much.)

After his defeat in the presidential election in 1912, Roosevelt went in search of another challenge, something that he could conquer this time. He chose the River of Doubt, a tributary of the Amazon river that had—until then—never been explored. Accompanied by some of the best guides in South America, as well as his own son, Roosevelt began a trip that would deeply impact the world, and shed a great deal of light on the murky interior of the Amazon. His journey changed the maps of that vast jungle, and the stories he brought back were so fantastic that people struggled to believe even he could have survived such an extraordinary trip.

Candice Millard’s book lays this journey out in vivid, sometimes disturbing, detail. This fascinating and brilliantly researched story is exactly the reason I love history so much, because it reveals that behind the names and dates, endless statistics and dry facts, there were people who lived and died, suffered and triumphed. Roosevelt was an amazing man, and his journey down the River of Doubt was a test that even he struggled with—and nearly didn’t overcome. The voyage was his last, and the effect it had on his health would eventually cause his death in 1919. His stubbornness carried him through a great deal of the trip, and without his solid courage and tenacity, his grave would no doubt rest on the banks of the River of Doubt.

The ordinary traveler, who never goes off the beaten route and who on this beaten route is carried by others, without himself doing anything or risking anything, does not need to show much more initiative and intelligence than an express package.