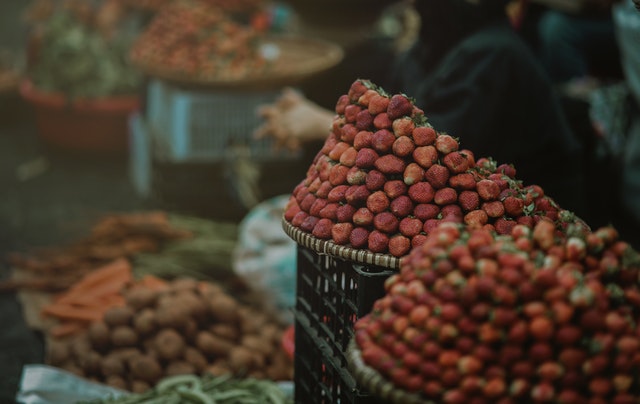 It’s nearly dark by the time I step off the bus. The air is dirty, this far downtown. I can smell the soot, the exhaust fumes, the pollution. The crowds are headed for home, tired from their long day in the tall buildings, the offices, the factories. I pull my hood up, keep my headphones in and my eyes on the oily pavement. They are in a hurry, but I have all the time in the world. The market doesn’t open until 7 anyway, and the last booths don’t close until after midnight.

7th and Main. I loiter on the corner, leaning against a brick wall while I wait for it to get dark. My backpack’s heavy tonight. I brought too much, I need the money, but if someone thinks to ask, if I’m stopped, I won’t be able to claim it as anything but merchandise.

I’ll be in jail so fast, I won’t even have time to think up a good lie.

When the street empties out and it grows a little darker, I vault over the barrier of the disused subway line and jog down the steps. The tunnels are dark, and the tracks smell of oil and dust. They shut down years ago, so long ago that people have forgotten about them. They hardly notice the entrances now, in the hustle of the streets, and only a few people use them. The homeless, a few gangs. Kids who are on the lookout for trouble.

And us. We use the tunnels every night. Always in a different place, always with a different pattern. Tonight, it’s 7th and Main. Tomorrow, it will be somewhere different.

I follow the tracks, walking on the old rails. They were electric once. Now they’re dead, same as everything else down here.

The market is set up just around the corner, where the lights won’t show. They’ve hung lanterns from the wires running along the ceiling, set them on the floor around their booths, hung them from the walls. I stick my hand in my back pocket, checking for the money I’ve been hoarding for tonight. I’ll buy first, then set up my booth. Some nights I don’t have the money to buy first, and the best merchandise is gone when I finally have enough to do some bartering.

I go for the vegetable stands first. Lettuce, tomatoes. An avocado. I stop to smell the limes, remembering the one I stole years ago from a real market. Limes are wildly expensive, but I’ve never forgotten the taste. Never.

Toilet paper next. Eggs. A bottle of milk from a farmer who’s been banned from selling so many times that his hands are branded black. I have a little extra money this week, a little extra merchandise of my own to sell, so I waste a whole quarter on hair clips for Emmi. She’ll like that.

They have books too, a few novels, some history books. I try not to even look. I haven’t had enough money for such things since I built a bicycle from parts in the dump and sold it. The money we use is outdated, obsolete everywhere but here. Everyone else—all the normal folk—buy and sell with the chip in their wrists.

But some of us—sewer rats, they call us—don’t have a chip. So we can’t buy. Or sell. Sewer rats that try are sent straight to prison.

When I have everything on my list, I set up my own booth. I have toothpaste this week, toothpaste and dental floss, watches and cigarettes. I even have a bottle of Irish whiskey, but that already has a buyer. I just have to deliver it. I started out selling simple things, matches, the occasional lighter. I’ve been caught twice, both when I first started. I got a slap on the wrist then, a night in jail to ‘think about what I was doing’.

I did think about it. In fact, I thought about it a lot.

In the end, I decided that if I was going to get arrested, I might as well be arrested for selling something expensive. Something I can make a living off of.

So now, I’m one of the best-known merchants in the subway line. I haven’t been caught, but if I was now, with the things I carry around, I wouldn’t be getting out after one night.

But, I’m smarter now. I don’t get caught. And I have enough to live on, even to live well.

Most sewer rats can’t even claim that.