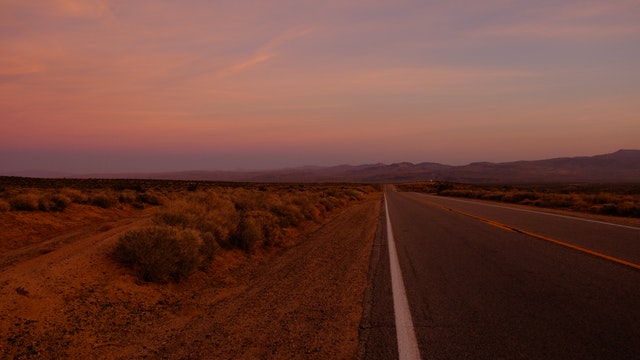 Single file while the wind blows, he tells us. One in front of the other. Sometimes I’m so afraid I’ll lose the person ahead of me that I keep my hand on their shoulder. Dust storms are hard to travel in, but it won’t be bad enough to stop until we can’t see the road under our feet, and I can still see the white lines between my boots. So we’ll have to keep moving. Socket doesn’t like to stop until we’ve made our miles for the day.

By the time we do make camp, the wind has died down again, and the air is so still that I can hear my own heart beating. Our tribe has grown in the last few weeks, and there’s near thirty of us camping on the road beneath the stars. We sort ourselves out, five or six to each fire, and the night swallows the bare hills and floods the valley below us.

I kick off my boots and toss them out of the firelight. They smell now, the leather as dirty and patched as if I dug them out of a trash bin, but they were brand new when I found them. We’ve been walking a long time. Four years, I think, although I haven’t counted. Maizie counts. She joined the tribe before I did, a dirty little redhead with a smudged nose and a black eye that’s never healed. She sleeps by my fire nowadays, and when the stars are wheeling overhead, bright as silver against black velvet, she’ll show me the book she carries.

She’s got everything in that book. Where we’ve been. What we’ve seen. In four years, I’ve forgotten most of the places we’ve seen, although we walked so far to see them. But Mazie always remembers, and she reminds me of them all. The big pine forests to the south, where the trees grew over top of the road and the ground was so thick with pine needles that we had to dig near a foot down to find real soil. Or the mountains in the west, where the air was thin and so cold that I thought we’d freeze in our sleeping bags. I can’t read her writing, but she flips through the pages with me, lying on her stomach with her chin propped up on her elbows, and tells me the stories that she likes most to remember.

I like listening to her read about them, although I don’t tell her so. She’s shy, shyer than almost anyone else I’ve ever met, and I have to pretend not to look at her while she chews on a strand of her red hair and reads by the firelight. When she reads about the deserted cities we’ve walked through, describing the cracked pavement and the dirty water, the shattered neon signs and the abandoned cars in the road, I can almost see them again. Like most drifters, we don’t stay long in the cities, preferring to keep to the road and continue on our way, but I’ve always liked passing through the empty streets. There’s always a chance of finding something in the dumpsters or the neglected stores. Most of them have been raided by now, probably many times, but I know where to look, and sometimes I find things.

But we never stay long. Socket leads us, not me, and he’s a drifter to his soul. He’s looking for something, I think, although I don’t know what that something is. Maybe he doesn’t either. So we keep to the road, roaming from shoreline to desert, from rolling plain to craggy mountain ranges. People join us sometimes, and people leave too, when they find the place they’ve been looking for. Everyone has somewhere, a place where a bit of their soul has always rested. When they find it, they stay, and we go on. Still searching. I’ve been looking for four years, but I haven’t found it yet.

Maizie is digging through her bag, looking for a pen that still works. I roll over on my stomach, watching her flip through the pages of her book and mark the date at the top of the page. She’s writing about the dust storm today, I think. About the bare hills and the shriveled, wizened trees we passed and the rocks that have been scorched red by the sun. About the stars that blaze so brightly that they almost light the sky for us.

Her writing is too small to read, but she catches me looking and smiles, reading along as she writes. I rest my chin on my arms, listening to her and watching the firelight play about her red hair until it’s nearly gold. I’m nearly asleep before I catch myself wondering if that bit of soul I’ve been searching for might be in person, not a place.

If so, it would explain why I’m still searching, even after all this time.