Sometimes, it is really hard to pick a favorite book.

I don’t mean that I have a shortage of books that I absolutely love. If anything, I have too many. (A fact that did not stop me from buying ten more just a few days ago.) No, I have plenty of books that I love and adore with all of my heart. The problem is deciding which one to talk about.

You’ve had that happen, right? Someone tells you to choose your very favorite book and suddenly—your mind is a blank. You’ve never read a book in your life. You have no favorites. What are they talking about??

This happens to me quite frequently. Generally, I panic and name the first book that pops into my head, hoping that the person asking will not take my answer as gospel or quote me on it at a later date. (They usually don’t. Thank goodness.) But, if the question doesn’t happen to be about books, I can occasionally answer reasonably. For example?

My favorite season is autumn.

My favorite animal is any kind of cat—even the bald ones. Or the huge ones that eat you.

And my favorite movie is—and always will be—Jurassic Park. 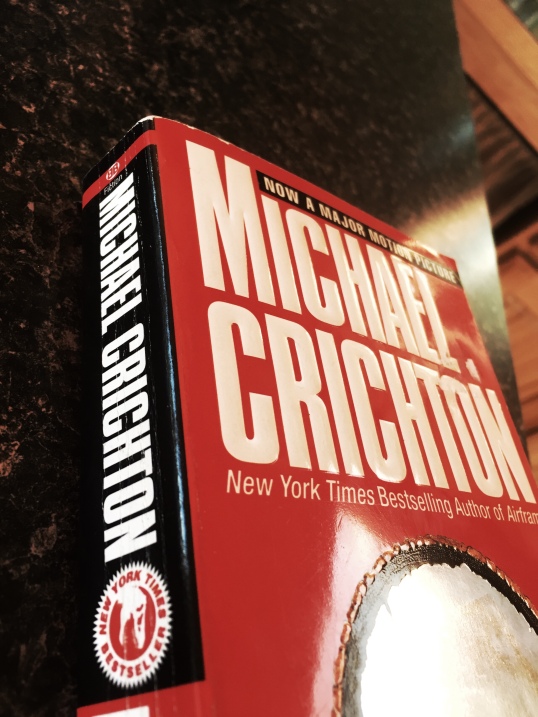 Which brings me to this review . . . because I have spent years declaring that I love the Jurassic Park movies and insisting that I will never—never, ever, ever—read the books.

I picked one up in a thrift store once, flipped it open, and somehow, by an incredible amount of bad luck, managed to land on a page where someone was being devoured by a raptor.

So for years, I avoided Michael Crichton’s, Jurassic Park. I loved the movies, celebrated with everyone else when Jurassic World appeared and went to the theater alone at night to watch Fallen Kingdom a few days after it came out. Finally, my wonderful, beautiful editor convinced me that I was crazy and I needed to give the book version of Jurassic Park a try. So, very hesitantly, I did.

And I loved it.

Michael Crichton’s Jurassic Park is very different from the movie version. The characters are different, parts of the plot, even some of the world building is completely opposite to what it was in the movie. Usually, I resent movies that don’t follow the book, but this one time, I was excited. I had a new Jurassic Park adventure, and I had no idea what was going to happen.

Michael Crichton is best known for his suspenseful, action-packed writing, and Jurassic Park is one of his best works. The island with its mysterious inhabitants, the scientists who had gone too far with their experiments, and the living, breathing relics of the past combined together beautifully to create a fast-paced, breath-snatching novel that entranced me. The scientific side of the creation of the dinosaurs is emphasized in these books, as well as the cutthroat industrial side of things that was so ignored in the movies. These dinosaurs were worth millions of dollars to the men who managed to present them to the world in a safe package, and the struggle to do that is infinitely more ruthless than the movies let on.

Jurassic Park has always pulled me in with its prehistoric feel and the wonder of what John Hammond and his scientists had done, and the book multiplied that wonder and made it real for me. New stories, new dinosaurs and threats, and—in some ways—new characters were opened up to me in these books, and I devoured them. I would highly recommend the books to anyone looking for more of Jurassic Park.

The planet has survived everything, in its time. It will certainly survive us.

One thought on “Jurassic Park”