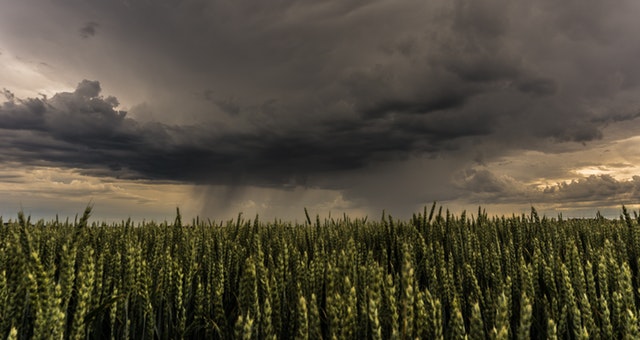 He throws me out after the fifth beer. My mother will follow me in an hour or so. She offends him less, I think, because she doesn’t answer back when he swears at her. She’s everything I’m not and wish I could have been. Soft and gentle, kinder than one of God’s angels, with mouse-brown hair and blue eyes that have the patience of the heavens in them.

I was born with his slate-gray eyes and his wild temper. One more thing I intend to hold against him until the skies burn.

Dusk is falling in the orchard when I leave the house and follow the lane toward the wheat fields. The wind is up, and I can see clouds rolling in from the west, dark as soot and building into a summer storm. Lightning cracks in the distance, followed by a rumble of thunder, and I leave the lane and wade into the waist-high wheat.

This early in the year, it’s still green, and the wind ripples through it. I went to the seaside once, when I was so young that the wheat towered over my head and my father still called me his son. I still remember how the waves looked, tossed about by the wind and capped with white foam. The wheat fields remind me of it on days like this. They sway and ruffle, catching the last of the light and throwing silver glints at the sky.

I’m never at peace on this farm, except when I’m here.

The clouds are overhead and the wind smells of rain before I reach the far edge of the field. The gypsy tents are pitched beneath the trees there, as far from the house as they can get and still be on our land. Their men help with the harvest in the fall, and if they pass through before then, my father always has work for them. But he doesn’t want them nearby. If he can see their tents or wagons, or if he can smell the smoke from their fires, he’ll kick them out. This is the only place that he never comes.

So, of course, this is always where I end up when he kicks me out.

Their fires are burning, and the smell of the stew bubble over the flames reminds me that he threw me out before I could eat. Two of their children, bare-footed and black-eyed, see me coming, and they run to greet me, babbling incoherently in that lilting, graceful tongue that never seems to need space for a breath. I swing one of them onto my shoulders, and he grabs handfuls of my hair and tugs, still shouting. Mama Kazia comes out of the tent, scolding, and kisses my cheeks, pushing me down on one of the cushions scattered around the fire. She’s got poppies braided into her black hair, and bare feet like her children. They’ve been here six weeks already, a long time for people who love the horizon, and we’ve managed to get past the language barrier. They chatter at me, and I talk to them, and if neither of us quite understands the words, we catch the meaning.

She’s clucking over my bruised face now, and one of her children brings me a puppy from underneath the wagon while I tell her about our latest fight, about my mother’s silence, the baseball games in town, the money I have stashed under my mattress from the odd jobs I’ve been working, and the train headed west next spring. She listens sympathetically, clicking her tongue every once in a while and dishing out stew to the children that come crowding around. She pushes a bowl into my hands too, and I eat with one of her toddlers in my lap.

The rain is pattering against the canvas awning when their papa returns. The older children hear him whistling, and they run to meet him and come back splattered in mud and laughing. He’s carrying them, two on his back and one on each hand, swinging like pendulums. The first few times I came here, I slipped off when I heard him coming. He caught me the third time, and we spent three hours talking about fishing and what bait is the best for trout.

He likes practicing his broken English, I think. I explain baseball to him, and he tells me where to find the best holes for brook trout in the spring or how to hunt down a blackbird’s nest.

A fool waste of time. That’s what my father would call it. But I’m never at peace on this farm, except when I’m here.