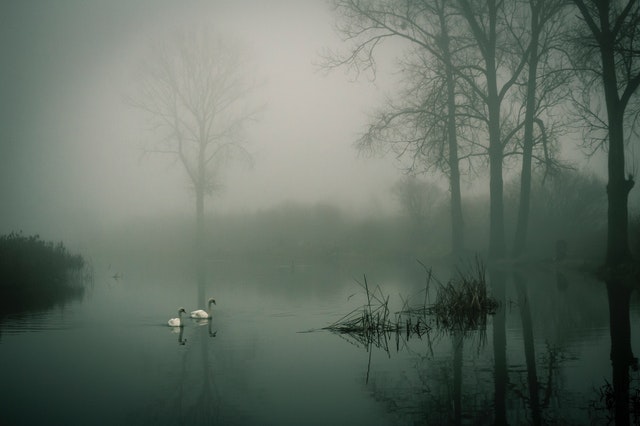 They left her to the marshes.

That’s the rumor, anyway. The women in the kitchens whisper about it when they mop the floors, and the men tell the stories in the stable. I’ve heard it both places.

She spurned a lord, and the marshes took her soul.

I’ve spurned my own lord. Time and time again. He’s told no one yet, but stories have a way of slipping out. When it does, they’ll do worse to me.

The marshes are calling, and I’ve decided to answer.

They’ll bring me here anyway, and I’m more afraid of their sharp tongues and hard blows than the brackish water and trailing willows of the marsh. I played in it as a child, always alone, always watched over by friendly eyes, and I feel their gentle watchfulness as I brush aside the willow branches and ease into the marsh.

Mud squelches to my knees, but I know the way through the marsh better than most. Better than any in the lord’s house, thank goodness. They won’t follow me here.

The mermaids hear me coming before I’ve gone two steps. I’m surrounded almost before I realize they’re here, and I trail my fingers in the water and pretend I haven’t seen them. Really, I only catch glimpses anyway. A rippling among the reeds on my left. A flash of silver and pink scales beneath the willows. Black hair trailing among the weeds.

I keep my eyes on the horizon and wait for them to come to me.

They do eventually. When they’re sure it’s safe. Startled mermaids are dangerous friends, but I’ve come to love them like kin, whatever our differences. They stroke my hands with their slimy fingers, tracing the bruises on my wrists and hissing in dismay when they taste the blood from my fingers in the water. I hum soothingly, swallowing the hitch in my throat. I’ve been banished to the marshes, like the woman in the old tales.

She spurned a lord, and the marshes took her soul.

How I wish they would take mine. They could wash it clean, rinse the bruises from my skin and the pain from my mind, and leave me with the kind of peace I’ve been needing.

Their hands tug me along, through thick mud and deep water, until the marshes have swallowed me completely and even the willows have faded into the night behind me. An island of thick moss and white sand rises out of the water, and I rinse the mud from between my toes and kneel on the bank, listening as their songs chase away the darkness in my mind. Their pale faces rise from beneath the surface, their strange eyes faded and dull as they smile at me.

Then the hounds begin the bay, away off at the edge of the marshes, and I know the hunt is underway.

The song of the merfolk changes, and their wide pupils narrow to slits, their gold eyes beginning to glow as they bare their spiky teeth in the direction of the barking and shouts.

The marshes have me now, and they won’t let me go again. Not without a fight.